We had so much fun kicking off the 2015 HBO Bryant Park Film Festival this year!

We performed our favorite songs from Back To The Future, Badlands, Ghostbusters, Footloose, The Poseiden Adventure, Chinatown, The Killers, and I’m No Angel. 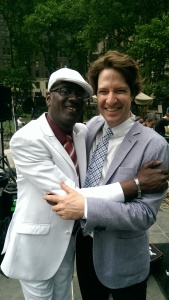 JD and Will in Bryant Park 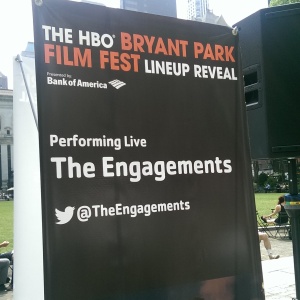 Our name in (sun) lights.

Visit our Twitter page to see footage and shout-outs from the show:  @TheEngagements

BACK IN TIME – Huey Lewis (Will)   Back to the Future

JOHNNY B GOODE – (Ryan) Back to the Future

LET’S HEAR IT FOR THE BOY – (Heather)   Footloose

POWER OF LOVE – Huey Lewis (Will)   Back to the Future

I CAN’T GET STARTED (instrumental) Chinatown

THEY CALL ME SISTER HONKY TONK – (Heather) I’m No Angel

THE MORNING AFTER – (Heather)  – Poseiden Adventure

It’s the launch of the HBO Bryant Park Summer Film Festival, and we will perform only music from this year’s line-up of classic movies! 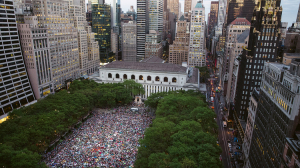 Hot dogs at Coney Island, piragua on every corner, and movies in Bryant Park—now entering its 24th year, HBO’s Bryant Park Summer Film Festival presented by Bank of America has become a bonafide NYC tradition. Every Monday night from the middle of June to just before Labor Day, thousands of movie-loving New Yorkers pour into the public midtown landmark for a (totally free!) night with a Hollywood classic under the stars. Recent summers have brought awesome screenings of popular favorites like Saturday Night Fever, The Shining and Casablanca, and this year’s line-up offers yet another season of great outdoor cinema.” 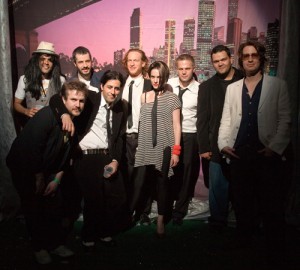 The Engagements is a 10-piece cover band specializing in favorites from the 1980s and before.  They play a lot of 80’s covers, along with rare soul and Motown.  The Engagements’ set lists are full of songs that aren’t been played to death by every wedding band.

Comprised of a group of professional musician friends, their band members have toured in the bands of some recognizable acts – from Michael McDonald and Michael Buble, to Sharon Jones and French Kicks.

Together, they are a band that has headlined NYC faves like the Bizarre Love Triangle fest at Le Poisson Rouge, Cruel Summer in Brooklyn, Wedding Crashers fest, and the Eugene Mirman Comedy Festival.

The Engagements are thrilled to dig into the soundtracks of this year’s Bryant Park Film Festival line-up.